The Simple Faith of Satan, Part 3: WE ARE CHURCH! YOU WILL BE ASSIMILATED! RESISTANCE IS FUTILE! 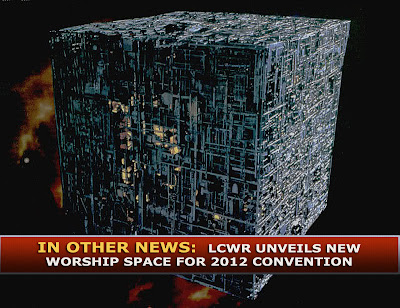 In the last part of this series, we discussed some of the confusion that arose in the wake of Vatican II.  What the Church had intended merely as an upgrade, many people interpreted as an all-out reboot: 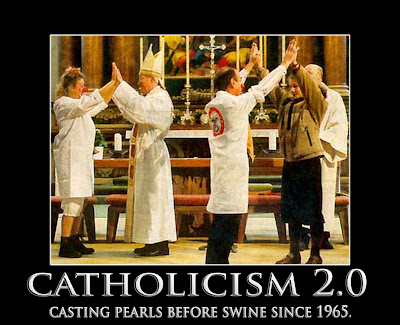 Which may lead many of the faithful to ask,

WHO IS THE CHURCH?

(AND WHO ARE THE BRAIN POLICE?)

It's not the first time we've had an identity crisis in the Church.  The first one came to a head about 1800 years ago, with the Arian Controversy.  In those days the question wasn't so much who the Church was, as who Jesus Christ himself was.  Finding and formulating the right answer took over a hundred years and four ecumenical councils.  Bishops with armies fought it out over this.  The result was the doctrinal definition that most (though not all) Christian denominations today accept: 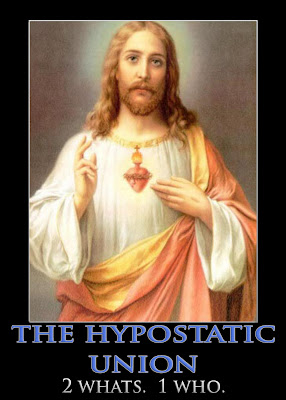 That is to say, Our Lord Jesus Christ has two separate, distinct, and complete natures (one human, one divine), but is nonetheless one Divine Person.

Now, that's what we call a mystery, and not in the Sherlock Holmes sense. 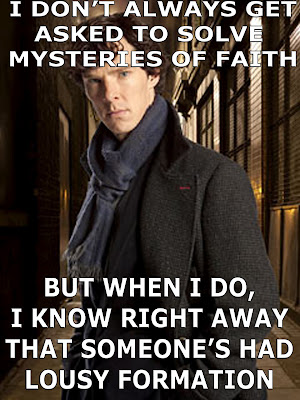 The whole two natures thing is a difficult balancing act, and as a result, it's easy to focus on one to the exclusion of the other.  Thus, the pre-conciliar Church tended to stress Christ's Divinity to the exclusion of His Humanity, the clergy over the laity (remember when we talked about Clericalism last time), subsidiarity over solidarity, and souls as individuals rather than as part of the Church as a whole.

Vatican II set out to correct this imbalance, but many in the Church, particularly those in positions of power,  wound up overcompensating.  Salvation became a collective affair,  spirituality became human sentiment, almsgiving became social work, and instead of having the Gospel preached to them, the poor got something closer to the Communist Manifesto.  And our religious went from looking like this: 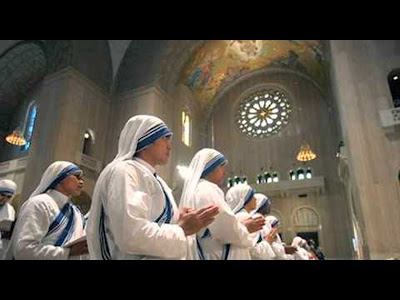 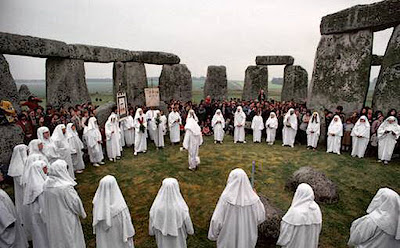 As a matter of fact, I have a lot more respect for today's Pagans, Wiccans, etc. who are at least honest enough to call themselves what they are than people who call themselves Catholic and subvert the definition of the, to the point of making it mean all but its opposite.

Hence, for example, the current difficulties with the Leadership Conference of Women Religious, a "subsidiary" of what Father Z. calls the Magisterium of Nuns, one of the myriad heads of the Hydra of dissent (remember, Antichrist has seven heads).  This is not to let renegade bishops, priests, and monks off the hook. (WTF? Time was, you couldn't get Germans to stop following orders.  I'm thinking it's that overcompensation thing again.)  They're scandalized by the suggestion that Catholic communities, dioceses, and theologians should be, you know, Catholic Catholic, as opposed to their own inferior brand.  Naturally, this doesn't make a lot of sense.  LarryD at Acts of the Apostasy (a refugee from my home diocese) imagines how it'd play out in the real world.  But reality's never been these folks' trip.

Dr. John Zmirak described this re-branding phenomenon in terms of the meme, "All Your Church Are Belong To Us."  I like to think of it more in terms of the Borg. (Definition here for the uninitiated.)  The individual means nothing; you're part of the collective, whether you want it or not.  Just look at their hymns.  Mention "Soul of my Savior," or "O, Lord, I Am Not Worthy," and they'll react like vampires in sunlight.  Those hymns are all but banned.  Today it's all about US.  We Celebrate; We Remember; We Are Companions on the Journey; We, We, We, We, All the Way Home.

Your parish has been assimilated.  Resistance is futile.

And since we're all the Church, and we're all equal before God, nobody else can tell us what to believe . . . 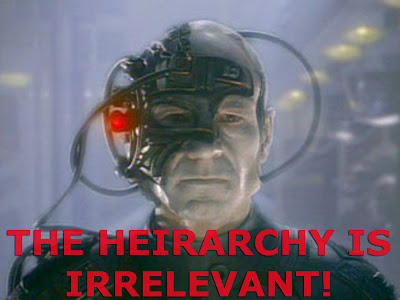 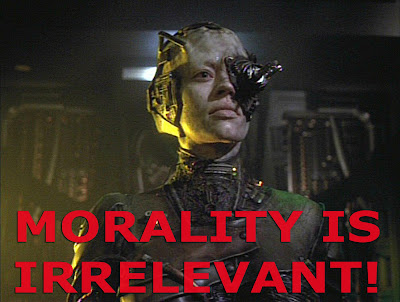 . . .and we can redefine the faith to suit our personal needs, because it's all about WE. 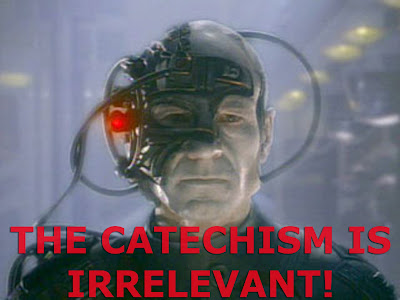 One of the biggest re-definition battles seems to be in regard to the Church herself.  We often use the term, perhaps somewhat unfairly, as interchangeable with the hierarchical clergy.  Defined in the broadest meaningful sense, the Church is all of us, the baptized, "the whole universal community of believers" (CCC, Paragraph 752).  We are all a part of the Mystical Body of Christ.  This distinction matters because there are still many laity in the church today who bear the scars of high-handed Clericalism in the past.  After all, as St. Paul tells the Corinthians, the eye cannot say to the hand, "I have no need of you," nor again the head to the feet, "I have no need of you." (1Cor. 12: 23)  The clergy, therefore, cannot say to the laity, "We have no need of you." 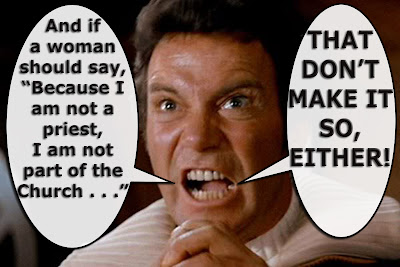 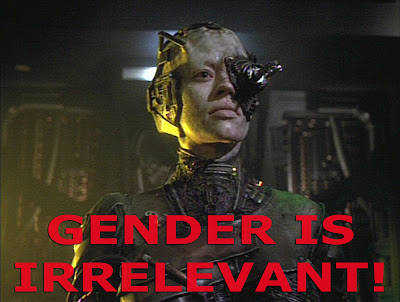 So, the next time you hear somebody say, "The Church is not the hierarchy," or "We're all the Church," you'll know you're being fed a partial truth to mask the taste of a bitter lie.  Yes, the Church is more than her hierarchy - much more - just as an army is more than its officer corps.  But it's the officers who call the shots.  Furthermore, impersonating an officer is a crime, and attempting to run things when you're not an officer is mutiny. 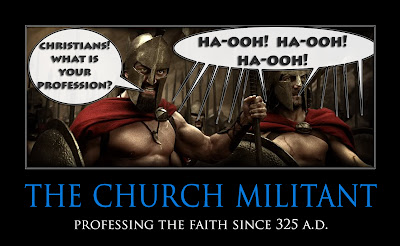 What do you think all those Old Testament wars were there to teach us about.  It's spiritual warfare.  The world is the theater, and our enemy is the devil.  You know, the first one to say, "I will not serve?" 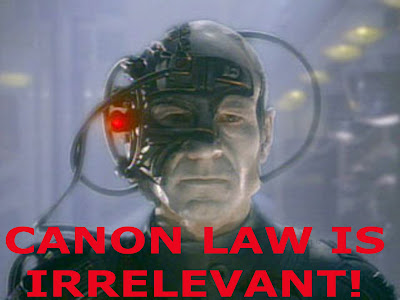 Fortunately, their days are numbered.  If the dissenters today are louder and angrier than they've been since the '70s, then like the devil in Revelation 12: 12, it's because they know their time is short.  There's a new generation of Spiritual Warriors out there.  They went through basic training with Blessed John Paul II, and now they're getting AIT with our current CINCEARTH, Benedict XVI, the Pope of Catholic Identity. 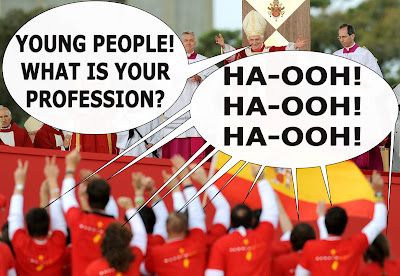 And while they're having their little Sabbat conferences where they discuss “moving beyond the Church, even beyond Jesus . . .” 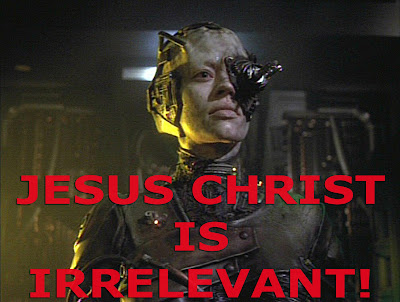 they fail to notice that the real Spirit of Vatican II is finally standing up.  And Jesus and His Church are already moving beyond them.
I think I've said my piece on this for a while, but I'll keep monitoring the situation, and we'll do Parts 4, 5, and 6 as needed.  In this case, the resistance is far from futile. 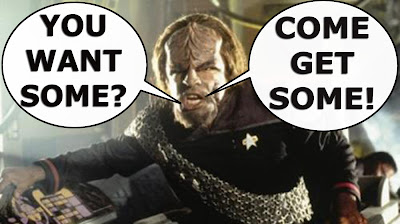