This last Sunday of the Church Year (Ordinary Form) marks the Feast of Christ the King. 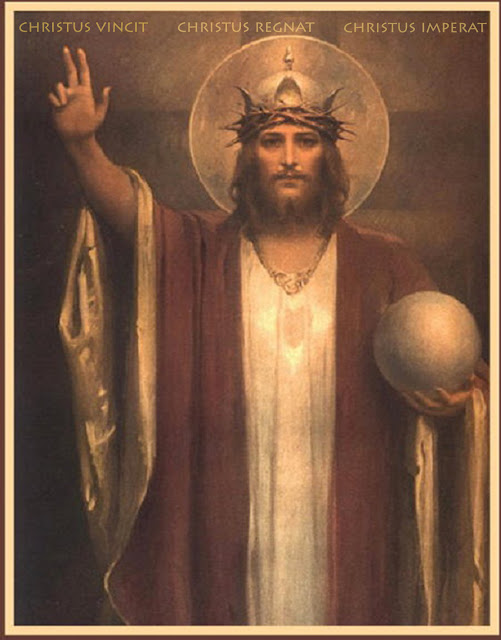 It is a young feast, as the Church counts time.  Pope Pius XI instituted it less than a century ago.  Perhaps this, along with its proximity to Advent, explains why it often gets so little love.  It's always fascinated me.  Most of our feasts commemorate past events:  the deaths of saints, the foundations of basilicas, historic moments like the Transfiguration and Ascension of Our Lord.  Some recall past events while looking forward to future things they signify.  Thus our coming season of Advent/Christmastide recalls Christ's birth and also points toward His Second Coming.  Eastertide and Our Lady's Assumption celebrate those events while also anticipating our own resurrection as a Church and being caught up to meet Our Lord in the clouds on the last day (cf. 1 Thessalonians 4: 17).  And at the Easter Vigil on Holy Saturday, all history past, present, and future comes together as one, revealing the Cross as the axis upon which it turns.

Today's feast, however, is unique in that it commemorates an event which, from where we now stand in space/time, has not yet happened.  The day when Christ puts all His enemies under His feet, and presents us as a kingdom of priests to the Heavenly Father (cf. 1Cor. 15:  24-25; Rev. 1: 6).

I've needed this feast.  Maybe you have, too.  Have the recent elections had you down?  The state of the world?  A society where we proclaim a national holiday to give thanks for all we have - then get up in the middle of the night to go shopping for more?  Where we smash, and beat, and tear, and draw down on each other for more?

Then this post-holiday holy day may be just the thing for you.  Have no fear.  Do not despair.  Do not be sad.
Christus vincit.  Christus regnat.  Christus Imperat.  Christ has conquered.  Christ rules.  Christ commands.

Have no fear.  Thirty-four years ago, Blessed John Paul II began his papacy with those words:  Nolite Temere!  "Be Not Afraid!"  He returned to that theme again and again down the years, as in Crossing the Threshold of Hope:  "Do not be afraid to follow Christ!"  "Do not be afraid of men!"

The world may think it's won.  Let it go on thinking that.  The prince of this world is already judged.  Christus vincit.  Christus regnat.  Christus imperat.  This is why today's Gospel reading doesn't show Jesus smacking down a demon, or calming the winds and the sea, or telling the Pharisees where to get off.  It shows him before Pilate, as king and conqueror, at the end of the eighteenth chapter of John's Gospel.  The "you say it," form of His answer may seem unclear, but  Christ is indeed King.  King of the Universe.  If you don't believe that, get your Bible and read what comes immediately after this scene.  Jesus has affirmed His Kingship.  Pilate's men then dress him in purple and pleat him a crown.  Pilate then brings Him out before the people:  "Behold your king!"

At the end of Chapter 18, Pilate had asked Our Lord, "What is truth," but now he can't seem to help but proclaim it.  Later, he will put it in writing, and when challenged, he will say, Quod scripsi, scripsi - "What I have written, I have written."

The people may beg to differ.  "Give us Barabbas!" they say.  Like Black Friday mobs (and a Black Friday it looked indeed), they crowded and pushed, and rushed the Praetorium gates.  "Away with this man!  We have no king but Caesar!"  So much for popular opinion.  Nevertheless, the king has been crowned by lawful authority, presented to His people.  Now He goes to be enthroned upon His Cross.
The Lamb of God is the Lion of Judah, and the Wood of the Cross is the Tree of Life.  In Hoc Signo Vinces - "In this sign, you will conquer."