Alright, time to wade into the controversy and let the haters get their hate on.

Somewhere in your Internet travels, be it Facebook or what-have-you, you've probably come across these guys.

*yawn*  You may be thinking the same thing I am: 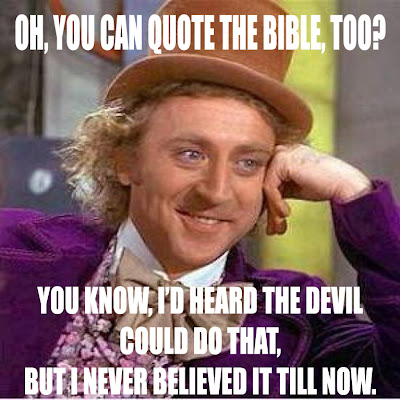 What are these people saying?  That words mean nothing, or can mean whatever we like?  Well, duh!  We already know they believe that from the way they bandy "marriage" about.

Or, they'd like to remind us what a really good job we've done with marriage on the straight, Christian side of things.  Touché.  Marriage has indeed fallen among thieves, been beaten, robbed, and left for dead by the roadside.  Where's a Samaritan when you need one?  Well, today, it seems the answer's not to bind up marriage's wounds and get it to a nearby honeymoon suite.  Rather, it's become fashionable to declare the sacrament in a permanent vegetative state and pull the plug.  It kind of reminds me of the current administration's attitude toward the Constitution:  Bush already wiped with it; why not go ahead and flush?

Another popular way of tackling the thorny problem of Scripture is to point out that the great Old Testament prohibition against homosexual activity (Standard Disclaimer:  I said "activity," NOT "inclination."  Temptation is not sin), found in Leviticus, chapter 20, is part of a list of prohibitions, including dietary restrictions that most Christians consider obsolete. Well, if you're going to dismiss one commandment, how many others are still valid?  After all, same God, same Bible, same book, same chapter.  Who's to say what's still relevant today, and what's not?

A thorny problem, indeed!  Fortunately, God saw this coming.  That's why He invented: 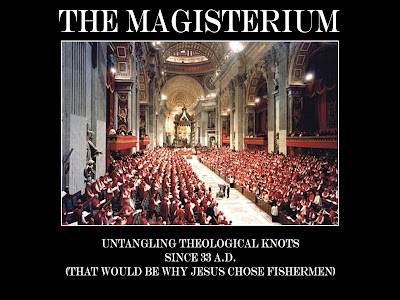 Now, despite what you may be thinking, the Magisterium does not explicitly define the meaning of every word in Scripture.  It does, however, offer us certain guidelines that help make things less confusing, when analyzing an ancient text written over the course of thousands of years, in a variety of languages, none of which anybody speaks around the house anymore.

One of these guidelines is that we read the Bible in the context of . . .

. . .believe it or not . . .
. . .the Bible!  I know - radical idea!  It's so much simpler to pull out verses one by one, and show how they contradict each other, or Church teaching, or even basic human dignity.

This would be a valid approach, if God were a sort of absent-minded professor, dictating His ideas at random to His earthly scribes.  But really, if you want to understand a given Bible verse (you do want to understand, don't you?) it's well to start by looking at the verses around it.  Surprisingly, this is also true of most things you read, so I can see why you needed me to point it out to you.

Another principle closely related to this is reading the Old Testament in the light of the New, and vice versa.  Everything, and I mean everything you read in the Old Testament has a deeper meaning within that the New Testament will reveal, much as an acorn contains an entire oak.

In Deuteronomy, chapter 21, we read:
When a man hath committed a crime for which he is to be punished with death, and being condemned to die is hanged upon a gibbet:  His body shall not remain upon the tree, but shall be buried the same day.  For he is accursed of God that hangeth on a tree:  and thou shalt not defile thy land, which the Lord thy God shall give thee in possession. (Deut. 21:  22-23)

I'm using a Challoner Bible here, because it was in arm's reach, and I'm on a roll.  Hope you don't mind a few thees and thous.

Anyway, what do we get from this?  One, that although nothing in the law prescribes hanging anyone on a tree, it's going to happen in Israel.  In fact, this is exactly what they wind up doing to the pagan kings of the Canaanites, whose land God is giving them.  So there's that first point, reading in context.

Second point, reading the Old Testament in light of the New:  Just for starters, note that this is why there's a hurry to take down the bodies after the Crucifixion (John 19: 31).  Also note that Jesus, the Most Holy, has become accursed, to redeem the accursed (cf. Galatians 3: 13).

Next time:  We put this stuff into practice, and I show you how deep the rabbit-hole goes.
Posted by adonais060669@gmail.com at 8:46 PM