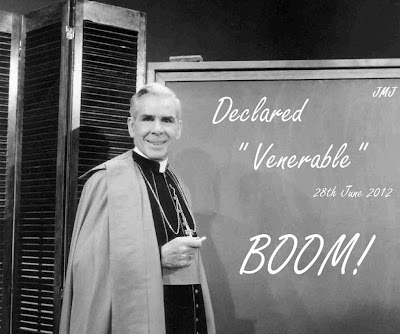 Heroic charity is rare.
Without it, what, except despair,
Can shape the hero who will dare
The desperate catabasis
Into the snarl of the abyss
That always lies just underneath
Our jolly picnic on the heath
Of the agreeable, where we bask,
Agreed on what we will not ask,
Bland, sunny, and illumined by
The light of the accepted lie?- W.H. Auden, "New Year Letter, 1940"

It was hard to be a Catholic kid in the 1970s.  Hard because you couldn't get anyone to tell you exactly what being Catholic meant.  You learned your basic prayers, of course.  You'd see a crucifix, and someone might tell you that Jesus was God's Son, Who died, then rose again on Easter, when bunnies lay colorful, pre-cooked eggs.  Your grandmother might teach you the Rosary (mine did).  Your parents took you to church, maybe sent you to a Catholic school (mine did).  That didn't necessarily help all that much.

In the theological turmoil and confusion that followed in the wake of Vatican II, amplified by the rebellion against Humanae Viate, few Catholics on the ground were really sure exactly what the Church taught anymore.  How much still applied from the old days?  How many of the new ideas were true?

Small wonder, then, that religious education was a mess.  Mark Shea is said to have quipped that CCD stood for "Cut, Color, and Draw."  I'd say that's pretty apt.  The less old, more progressive teachers, following the workbooks, spoke of "Signs and Symbols," which apparently existed so we could draw them on construction paper, cut them out, and make mobiles and mozaics out of them. (Hosanna to the Lord of Arts & Crafts!)  So much for doctrine.  As for morals, it essentially added up to "Mean people suck," swathed in a vague echo of Kennedy-era volunteerism.

On the other side of this bad coin were a few leftover Jansenists, who painted us a face of God that wore Big Brother's moustache, with our Guardian Angels as a kind of heavenly KGB, just waiting for some juicy sin to report.  Caught betwixt this catechetical Scylla and Charybdis, you practically needed a Freedom of Information request to get any idea who this God person was, why somebody would want to kill His Son, and what any of this had to do with you.  Who are you, Jesus Christ, and what do you want from me?


The answer came when I was about nine or ten, and it came from a man who would be dead within a year.  Archbishop Fulton J. Sheen had a gift for preaching and teaching whose equal I've not seen since.  He was the world's first televangelist. (Bet you thought that was a Protestant invention - nope!  Billy Graham took notes from him).  His 1950s show, Life is Worth Living, ran up against Milton Berle, and beat him in the ratings.  He worked with the missions for years, as Director of the Society for the Propagation of the Faith, held professorships at Catholic universities and seminaries, and made numerous converts, some of them notable.  He also served a brief stint as Bishop of Rochester, NY, but left after three years, having neither time nor talent for administrative duties - not unlike some other bishops I could name:  "It would be a grave mistake for us to neglect the word of God in order to wait at table." (Acts 6: 2) [NOTE:  I'm using the New English (NEB) translation here, because that was Bishop Sheen's favorite.]

IIRC, it was in 1979 that my father got hold of a series of tapes from retreats Bishop Sheen had led.  They were my road to Emmaus.  The Bible, Christ's life, His death, His resurrection, the Church, the Mass, the Sacraments, the love of the Cross, the value of pain, and the transferability of merit - all of it began to make sense, as one coherent whole.  It's the same faith I have today, thirty-some-odd years later.  Everything I've learned since has merely added to or clarified the picture.

Archbishop Sheen prefigured much of what the Church is about today:  the need for evangelization, a more Biblical dimension to our theology, the dual dangers of Marxism and Ayn Randinanism, the need for personal holiness as the strongest argument for the Faith.  If you've followed the pontificate of Benedict XVI much, you'll note these same themes coming up again in his teaching as well.  Small wonder, then, that yesterday the Holy Father approved a declaration of Heroic Virtue for Bishop Sheen, the first concrete step toward canonical sainthood.  In the blogosphere, I've heard someone propose making him the patron of the Internet.  I'll second that, especially for Catholic Bloggers - he'd have been all over this technology!  More than this, though, I propose Fulton J. Sheen as patron of the New Evangelization in general.  He who wore a silver pectoral cross in reparation for all those priests and sisters who took off their identifying apparel to blend in with the world - he above all knows how to reclaim our Catholic identity.

Venerable Fulton Sheen, pray for us!  Pray for Rochester.  Pray for America.