Thou believest that there is one God.  Thou dost well.  The devils also believe, and tremble.  (James 2: 19)


I want to talk about dissent.  Actually, I don't, but it's been making the news so much lately that I figure if it won't shut up, why should I?

Between the huff over the Congregation for the Doctrine of the Faith's attempt to reel in the Leadership Conference of Women Religious,  their recent censure of an heretical book on sexuality by a Sister of Mercy who must make the ones who taught me blush, and the never-ending dust-up between the U.S. Bishops' Conference and an all-but-excommunicated HHS Secretary, dissent this year seems louder than it's been since Humane Vitae came out, and more pathetic than it's been since this:

Now, in our last talk, I mentioned some of this, but I was aiming more at the garden variety, non-denominational Church-hater:  the kind who'd gladly follow Jesus anywhere, if He'd just stop hanging out with those shady-looking guys from the docks, who smell like fish, get everything bass-ackwards, and think they're somebody just because they're with Him.  In this series, I'd like to address dissent amongst the insiders, those who insist on bearing the name of Catholic, yet think nothing of ignoring, denying, or even outright publicly condemning Catholic teaching.  See whether they look Catholic to you, or whether they remind you more of the  people in Revelation who "say they are Jews and are not, but are the synagogue of Satan." (Apoc. 2: 9)

"'Synagogue of Satan?'" you say?  "Do you mean to tell me they're Witches?  Devil-Worshipers?  Anton La Vey and all that? 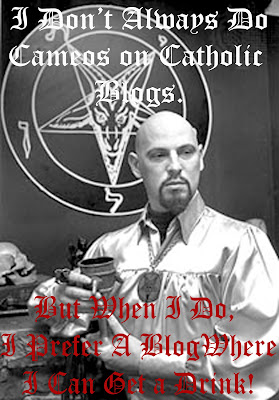 Well, no, of course not.  I suspect that very few, if any of them, go that far.  But consider:  Jesus emptied Himself of His Divine Glory and took on the form of a slave, to serve and not to be served.  It was Satan who famously said, "Non serviam," yet insisted upon his right to remain in heaven, where only God has any real right to dwell.

As the master shall the servant be.  When I look at this: 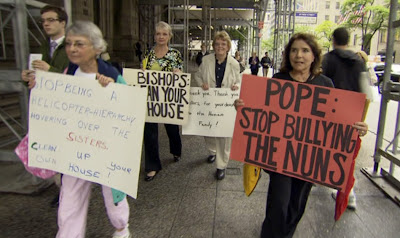 Whom are they serving?