And so, the verdict is in.  A majority of Americans, and a majority of Catholic Americans, has re-elected a regime that has mandated the faithful to fund infanticide, sacralized sodomy, and is poised to drive religion, not only from the public square, but from health care, education, and charity work as well.
If you're within shouting distance of my generation, you may remember watching the Berlin Wall come down in 1989.  Like me, you may very well have rejoiced that the Cold War was finally over.

Bet you didn't realize we'd lost.  I know I didn't.

When President Obama said that America was no longer a Christian nation, we called it an outrageous lie.  In fact, the president was merely telling us, correctly, what time it was.

It is twilight - evening in America.

Welcome to the Great Rude Awakening.  We are no longer a center-right nation that values hard work and fair play.  We are now a center-left nation that values fair work and hard play.  Religion is the new porn, and vice versa.  Life begins when you're old enough to vote, and ends when you're voted off the island.  Individualism is selfishness, the Gospel is hate speech, and self-denial is genocide.
And it's all the will of the people.  Vox populi, vox diaboli.  The "silent majority" that gave Nixon his landslide forty years ago, that gave Reagan his mandate thirty years ago?  A lot of them are dead now, and their descendants do not share their fathers' values.  We are a minority.  Not even a minority.  We are a small fringe that makes up part of a minority, together with libertarians, hard-money activists, protectionists, Ayn Randians, military adventurers, and yes, sad to say, even a few white supremacists.  Even if we somehow take back the reins of power, what could we do?  Ban abortion and gay marriage, drive the social engineers out of our schools and replace them with effective teachers, re-establish blue laws to encourage church attendance?  How?  How do you enforce a law, however just, that most of society doesn't want and will not back up?  Look at Prohibition.  There's no way to enact such laws without becoming the dictatorial police state we most fear.

The U.S. Conference of Catholic Bishops must be in a similar quandary.  The conference goes into its Fall General Assembly next week knowing that more than half its flock are giving it the finger and are de facto apostates and/or schismatics who will drop the name of Catholic the minute it works to their disadvantage.  It would seem that the bishops must either put in their teeth and start laying down the law, or resign themselves to being not so much a prophetic voice in the wilderness as a tree falling in the forest that no one hears.
So what to do?  Politically, we're beaten; it's hopeless.  I'm not saying we shouldn't still vote.  I'm not saying we should turn our backs on society, retreat to our Catholic ghettos of old, and wait for the Huns to arrive and start Middle Ages II.  For one thing, the Visigoths and Vandals are already here.  They're us.  Without the sanctifying grace of Christ and His Church, we're devolving back into the barbarian hordes our ancestors were. 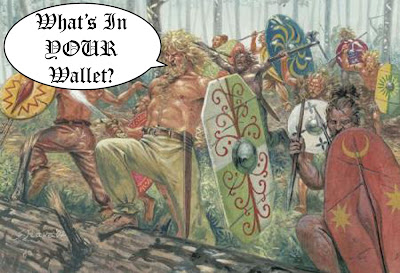 What I am saying is that we can't count on mere politics to save us anymore.  At best, a Romney administration would have only been a stop-gap, while we worked on building permanent solutions.  Like Original Sin or falling down a well, we got ourselves into this mess, but that doesn't mean we can get ourselves out.

If we want to save our country, our society, our civilization, there's only one move left open to us: 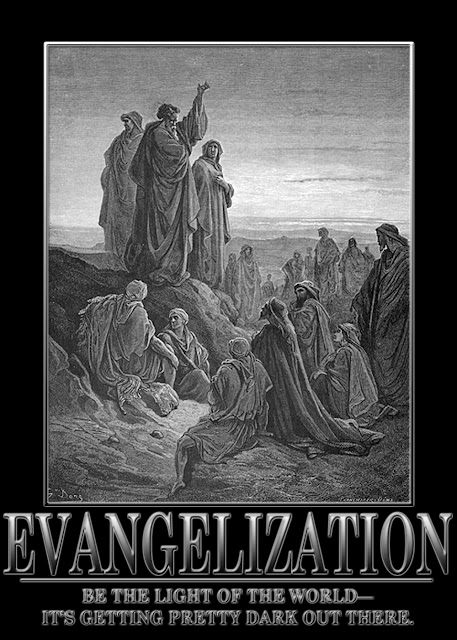 Do I mean preaching on street corners?  Only if you're good at it.  The world has heard all the sermons.  It's heard all the apologetics.  It's ready to deny and ignore them all.  But one thing it can't ignore is personal holiness.  For most of us, it means random acts of kindness.  The corporal and spiritual works of mercy.  Let your light so shine before men, that they may see your good works and give glory to your Father who is in heaven" (Mt. 5: 16).  We must be prepared to jack up our prayer life, and to make spiritual sacrifices and self-mortifications, for "this kind cannot be driven out by anything except prayer and fasting" (Mk. 9: 29).  We need to live close to the sacraments, so that they'll see we've been with Jesus.

That above all.  Get.  With.  Christ.  Read his love letters in the Scriptures.  Visit Him in Eucharistic Adoration.  If your parish doesn't have a Perpetual Adoration chapel, adore Him in the tabernacle.  If you can see Him through the accidents of bread and wine, a couple of metal doors should be no problem.

Get with His Mother, too.  She was the first evangelist, as Mother Theresa tells us, because the first thing she did after she received Christ was to bring him to St. Elizabeth in the Visitation.  The Rosary is Our Lady's lasso.  It has roped more souls into heaven than even the angels could count.

Bishop Sheen (forty years ago, no less!) predicted that the postmodern Church was like Gideon's army in Judges 7.  Christ is thinning his ranks, telling the cowards and the comfortable to go home.  We may be few, but He is with us:  "The Lord will fight for you, and you have only to be still" (Ex. 14: 14).

And for God's sake, be joyful!  Don't get into arguments.  Don't get mad at your enemies.  Pity them.  Say, like Shelley's Prometheus, "I weigh not what ye do, but what ye suffer, being evil."  Consider that, as John Paul II said, hell begins here.  If you've been far enough down the path of mortal sin, as I have, you've felt it.  You know how awful it is.  Imagine what some of these folks who hate us are going through.  Show some compassion, and remember, we're here to help.

We've got to change the culture.  That's the real transformation America needs.  If we can do that, the laws, economics, and politics will take care of themselves.