A while back (quite some time ago, really), we discussed the resemblance of certain dissidents of a Modernist bent to the "Next Generation" Star Trek's arch-nemeses, the Borg. 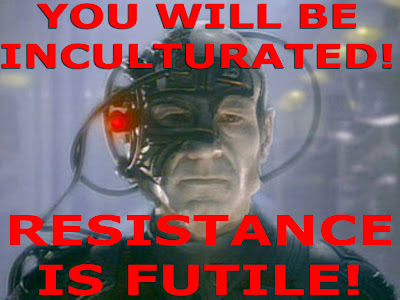 Call me mean, if you like, but it does kind of fit.  The quasi-Marxist insistence on collectivism (note how often the word "we" appears in most of their hymns) and stretch-or-truncate-to-fit egalitarianism.  Individuals, their individual needs, talents, and wishes are irrelevant.  It's all chopped up and mixed around in a great liturgical blender until it comes out a smooth, even Long Island Iced Tea of heresies with a twist of deconstructionism and a low-fat froth.

But friends, there is another extreme to which one can go.  One that starts with a reaction against all the above.  One that starts off wanting nothing but a sense of holiness, beauty, solemnity, and continuity with those who came before us.

Sounds reasonable enough, yeah?  I agree.  I've been sympathetic to a lot of this.  I hate watered-down, ugly, pedestrian worship, mis-taught catechetics, and seeing ancient ritual replaced with funky-looking moves and gestures that some "professional liturgist" cooked up on the fly 15 minutes before Mass (and expects you to join in).  Sorry, I came in for sanctifying grace, not interpretive dance.

Nevertheless, there are limits.  There exists, on the far edge of this community, a species of Traddy that does not so much love God as hate their fellow man.  They white glove the liturgy, the hierarchy, and worst of all, men's souls.  They sit through Mass, parse through sermons and interviews, memorize ancient books of rubrics that haven't been in force in 50 years, looking for the least imperfection to call somebody on.  And when they find it, they have zero mercy. 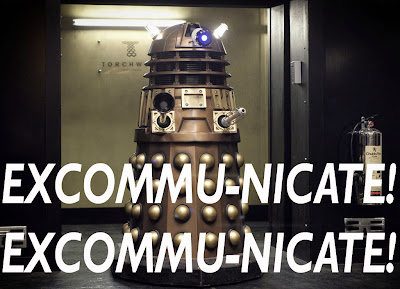 Anyone who dares change anything, or get in the way, or does something wrong with his left pinky while elevating the host, is The Enemy Of The Faith and must be opposed at all costs.  It's not hard to find this type yammering on around the Internet.  They have their own sites (which I won't dignify with links), but no one goes there except them and their own ilk, so they evangelize by way of trolling anyone else who comes within their radar. (If you want to find some to look at on your own, just go take a look at whoever's kicking Mark Shea this week*.  Your nose will tell you).

I warn you now, any posts loaded with transparent rhetoric, like "You talkin' to me?" or "I have no idea what you are talking about," or "I neither know, nor have heard of any such persons amongst Traditionalists; are you sure you don't mean 'Modernists?' or anything amounting to, "Why me and not Them?  Why don't you pick on someone your own size?" will be deleted with extreme prejudice.  Possibly tortured first, if in a moment's pique I forget to be charitable.

Why?  Because in Pope Francis' old stomping grounds of Buenos Aires - IN HIS CATHEDRAL - a small mob of these punks disrupted an ecumenical service commemorating the 75th anniversary of Krystallnacht. 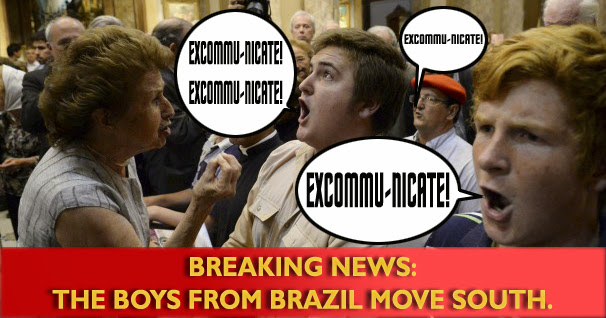 I barely have words.  Let me quote Phil Lawler at length while I think of some of my own.

First, if you disrupt services at a Catholic cathedral, please don’t try to tell me that you’re defending the Catholic faith.

Second, if you shout out the Rosary to drown out prayers, please don’t tell me you’re honoring the Virgin Mary.

Third, if you refer to observant Jews as “followers of false gods,” please don’t tell me that you worship the God of Abraham and Isaac.

If you don’t think that the SSPX is in schism, please tell me how to describe a group that claims its own hierarchy, professes its own doctrine, rejects the official teachings of Catholicism, and describes itself as the one true church.

Thank you, Traddie Daleks, for giving Christ, Catholicism, and your own founder a bad name.  Thank you for rending Christ's body with the same un-civilized mob tactics preferred by the Rainbow Sash movement.  Not only does this make you no better than they are; it makes you ten times worse.  Here are some reasons why.

You know what?  I hope the Holy Father does kick it old-school for your sakes.  I hope he speaks Ex Cathedra, declaring, pronouncing, and defining that the teaching of Nostra Aetate concerning Jews, Protestants, Muslims and Non-Christians is revealed by God and to be held universally by all the faithful.  I hope he alters Canon Law and brings back the Anathema, just so he can declare it on anyone who dares say that the Jewish people are accursed, or that Non-Catholics don't have the same right to religious freedom the rest of us desire and deserve.

I hope you come to your senses.  Otherwise, I'm going to have to start behaving myself, so I don't have to spend hell with the likes of you.

Borg to the left of me. Daleks to the right.
Here I am, stuck in the middle with the Jews.

And you know what?  There's nowhere I'd rather be. 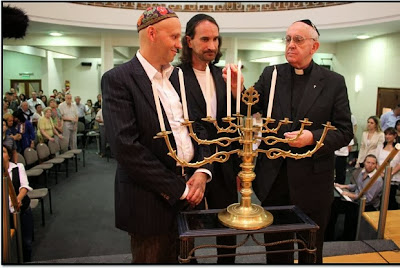 *As I write this, Mark actually doesn't have any comments on that particular post.  Trust me, though, he will.  The reactionaries' habits are so ingrained that they automatically stamp and whinny every time he says, "Blücher!"
Posted by adonais060669@gmail.com at 3:51 AM