TWO POPES, TWO BISHOPS, TWO SISTERS AND A TRANSFIGURATION - BUT THE SAME SPIRIT (OR, Why Two Visible Heads Are Better Than One)

Well, hello, everyone.  Been a while, hasn't it?  See, I had this hospitalization thing (Type II Diabetes), and some long, slow recovery.  Then there was the soul-searching, as I questioned my motives for blogging in the first place - yeah, that's probably going to come up again at some point, but that's me.  I won't promise anything regular, but while my first novel is out to beta readers and I'm well into the research-and-notes phase of my second, I've got a moment to put some thoughts down on . . . er, electrons, I guess.

So, what have I missed? 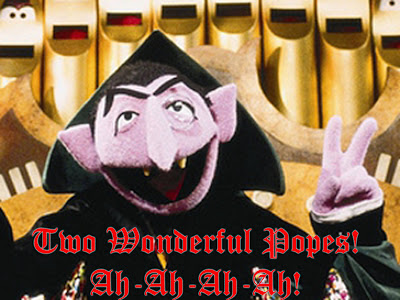 Two popes, and a whole lot of dopes. 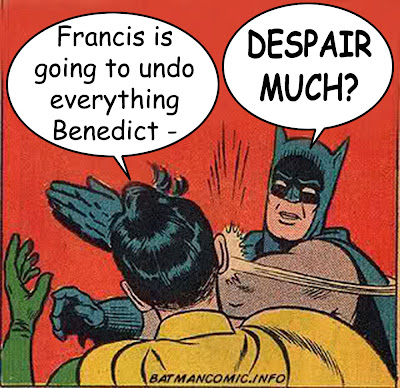 We've all heard the narrative, haven't we?  Heard it to death.  Big bad Benedict was the Pope for this Church:
While Pope Francis represents this Church:
Well, let's put this idea to the test, shall we?  Only instead of quoting lines out of context from ill-translated interview questions answered on the fly, what say we turn up the volume and focus on actions, hmm?

Let's take a recent example from my own beloved upstate.  When Buffalo's Bishop Kmiec retired, Mean, Nasty, Recactionary, Misogynist Benedict replaced him with an über-devout catechetics expert from New England.


WHAT'S UP WITH THAT?

Well, part of it has to do with ill-managed expectations.  For some reason, people assumed that if Francis didn't explicitly repeat everything Benedict said before him (and sometimes even when he did), he must not believe it.  This is like saying that since John's Gospel omits many of the events found in the Synoptic Gospels, John must be repudiating Matthew, Mark, and Luke.  Rather odd, when it's John who has Jesus praying for unity among His disciples in Chapter 17.

The reason Francis doesn't go around repeating Benedict is that he assumes (perhaps foolishly) that we already heard Benedict.  That he treasures Benedict's doctrinal legacy is clear in his speech last month when awarding the Ratzinger prize, praising Benedict for his Jesus of Nazareth trilogy:

No one can measure the good he has done by means of this gift; only the Lord knows! But we all have a certain perception of this, having listened to so many people who, thanks to these books on Jesus of Nazareth, have nurtured and deepened their faith, or have indeed drawn close to Christ for the first time, as adults, bringing the demands of reason alongside their search for the face of God.


Benedict didn't just give up, give in to his enemies, and let them have the new direction everybody wanted.  He had a plan in mind.

THEN WHY DID POPE BENEDICT RETIRE? 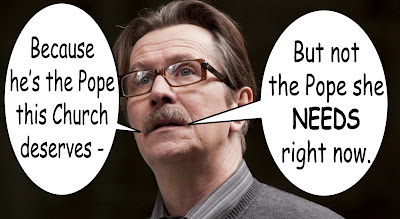 Pretty much why he said:

I have come to the certainty that my strengths, due to an advanced age, are no longer suited to an adequate exercise of the Petrine ministry. I am well aware that this ministry, due to its essential spiritual nature, must be carried out not only with words and deeds, but no less with prayer and suffering. However, in today's world, subject to so many rapid changes and shaken by questions of deep relevance for the life of faith, in order to govern the bark of Saint Peter and proclaim the Gospel, both strength of mind and body are necessary, strength which in the last few months, has deteriorated in me to the extent that I have had to recognize my incapacity to adequately fulfill the ministry entrusted to me.


In a word, he'd taken us as far as we can go, and the next step required a pope with the physical stamina to go out to the world.  And isn't that just where Francis rocks.  Our.  Socks? 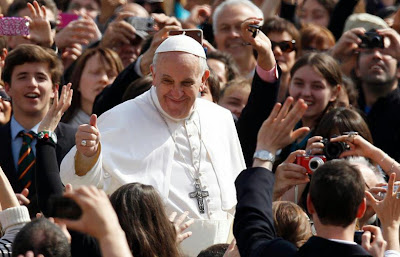 In the end, I think, it all comes back to the Transfiguration. 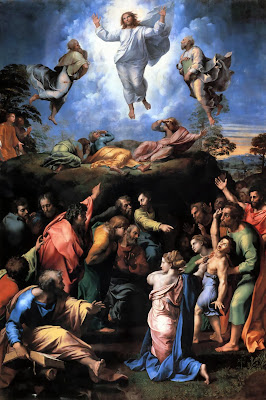 Jesus takes his Big Three up Mt. Tabor - Peter, James, & John - The first Pope, the first to die, and the last to die.  There they see His glory for what it is, at least insofar as unregenerate human eyes are able.  Peter wants to build a shrine, maybe sell tickets.  This is what he signed on for, baby.  That and fish.  Lots of fish.

As Bishop Sheen put it, Peter "tried to make the honeymoon the marriage."

Our Lord is having none of it.  Back down the mountain with them.  Down where the other nine are making asses of themselves, trying to exorcise a demon that just Will. Not. Budge.

In a word, it's Monday down there.  Coffee break's over; back on your heads.

If, when you think of the Transfiguaration - as I will this morning in the Luminous Mysteries - you think only of Jesus standing up there with Moses and Elijah, while the apostles stand there picking their jaws off the ground, I humbly suggest you're missing much of the story's point.  Yes, Jesus is Lord.  He is glorious.  And to be fair, his chat with the two prophets seems to be revolving around His impending crucifixion (the problem being, the apostles still don't get it).  But the coming back down is the punch line, if you will.

The first thing Christ told His disciples was, "Come and see."  The last thing he said was, "Go, and tell."

This is the sum of the whole Christian mission.  First we go up the mountain and behold Christ's glory - the glory of His Divinity, and the glory of His victory over death.  Then we go back down, to a world full of devils, convulsing society and growing ever more entrenched.  This is the meaning of the New Evangelization.

It also recalls the story of Mary and Martha. 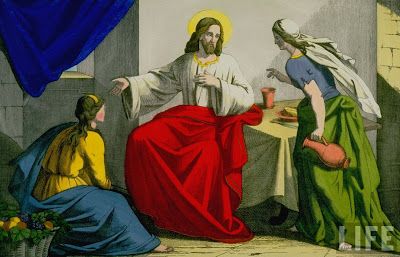 From the tenth chapter of Luke:

38 Now as they went on their way, he entered a village; and a woman named Martha received him into her house. 39 And she had a sister called Mary, who sat at the Lord's feet and listened to his teaching. 40 But Martha was distracted with much serving; and she went to him and said, "Lord, do you not care that my sister has left me to serve alone? Tell her then to help me." 41 But the Lord answered her, "Martha, Martha, you are anxious and troubled about many things; 42 one thing is needful. Mary has chosen the good portion, which shall not be taken away from her."


For centuries, doctors of the Church have seen in Martha and Mary the embodiments of the Active and Contemplative modes of Christian life, respectively.  Methinks Pope Benedict represented the contemplative.  As Pope Francis said,

"He gave a gift to the Church, and to all humanity, of what was most precious to him: his knowledge of Jesus, the fruit of years and years of study, of prayer, of theological investigation, and he made it available in the most accessible form”.


And Benedict will stay on, to pray and contemplate on our behalf, while Francis leads us down the mountain to do battle.

In the last chapter of her Interior Castle, St. Teresa of Avila says that Mary and Martha ought to walk together on our path to heaven.  Now we have them both in Rome.  SCORE!